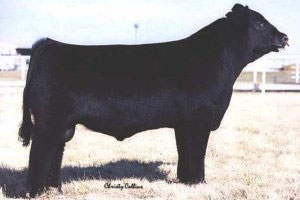 One of the most recent breeds to be introduced to the U.S. beef industry, the Maine-Anjou has hit the ground running. Its large size and easy fattening abilities make them a resource many ranchers want to tap into.

The Maine-Anjou is a beef cattle of French descent. It developed in the fertile, northwestern part of the country with resources enough to support a large multipurpose cattle breed. Though the modern usage of the Maine-Anjou tends toward the beef industry, they were originally developed as both a beef and milk producing animal-sometimes even used for draft purposes. This multifunctionality is not hard to believe when one actually sees a fullblooded Maine-Anjou. They are a very large, well muscled breed with red spotted bodies. The Maine-Anjou began as the hybridization of cattle form the Mancelle and Durham regions. Count de Falloux started this cross in 1839, with promising results. These cattle sold well at market and by 1850 were making their presence known through French agricultural trade fairs. The breed society formed in 1908, but by 1909 changed its name to the Society of Maine-Anjou Breeders, reflecting its geographical location.

It was apparent to the cattle producers that an influx of Maine- Anjou would serve to compliment other breeds. The high genetic diversity from introducing the continental breed, produced crossbreeds with high feedlot performance. In lieu of the likely upsurge of hybrids, the American Maine-Anjou Association created the Maine Tainer Program. Under this new registration option animals from 5/8 down to ¼ Maine-Anjou blood were available for registration. This option gives ranchers the ability to keep records of breedings and produce consistent offspring.

The requirements for steers and bulls call for them to have a registered sire, for steers it must be a bull registered with the AMAA. For cows, the registration prerequisite is that they be at least ¼ Maine-Anjou. From a producer standpoint it allows customization for a breeding program by taking environmental or economic variables into consideration. The cattle breeds better suited to their corresponding environments can be used with the Maine-Anjou for specialized results.  This registration program also promotes complimentary type breeding. In such cases the cross between a specialized or purebred male to a crossbred female will maximize the desired characteristics –that is those coming from the male – while at the same time minimizing any undesired traits. This systematic crossbreeding strategy has been put into effect by breeding more Black Angus into the Maine-Anjou.

The Maine-Anjou are    feed efficient, large cattle that provide high cutability and marbling qualities.  Due to their large size, in the past they had some calving problems. With careful selection, even within purebred Maine-Anjou, the cattle structure is more conducive to calving ease. The modern Maine-Anjou is a more compact specimen with even greater efficiency.

The Maine-Anjou is one of the highest marbling of the continental breeds. From a commercial standpoint, it provides a favorable option for crossbreeding programs. When crossed with Angus bulls, the results are “black gold”. The disposition of these two breeds is very docile. From the feedlot perspective, these quiet cattle are less likely to become stressed resulting in positive gain rates and feed ratios. From a consumer point of view it is a hybrid of two of the best, if not the best marbling breeds. The Angus high palatability traits combined with the larger Maine-Anjou muscling and cutability, makes a profitable cross.

In all the Maine-Anjou provides a wealth of crossbreeding benefits. On its own, it is an excellent variety of beef cattle, but when crossed with the Angus for example, it becomes a superlative animal.