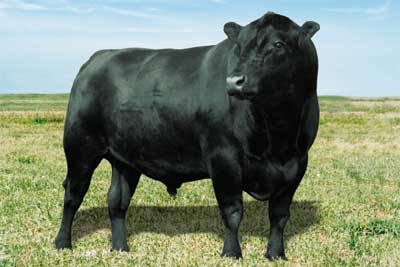 One of the most successful English breeds of cattle, the Angus has long been the cattle “business” breed. Its black color is highly sought after in crossbreeding programs as a potential seal of Angus quality. Perhaps the most represantitve breed in cowherds, the Angus holds a well earned spot amongst all beef breeds.

The Angus breed began in the northern regions of England. Originally both red and black cattle were equally selected for in attempts to get high quality traits wherever possible. In the latter half of the 18th century, the cattle of the Aberdeen – Angus counties of northeast Scotland were being heavily used for the improvement of other regional cattle herds.

The very first Angus cattle were imported into the U.S. in 1873. George Grant, a Kansas rancher wanted to develop the Angus as his primary breed and introduce it to the region as an ideal beef option. At their first public appearance in the 1873 Missouri Exposition, the Angus cattle were negatively received. At this time polledness was not yet appreciated for its benefits within feedlot cattle, and the black color was too different from the common red coloration seen in the familiar cattle. Angus ranchers however were not dissuaded and continued to promote the Angus and also began to crossbreed it with the hardy Texas Longhorn. The results were polled, very hardy black calves – a very appealing cross to past critics. A heavy importation of Angus cattle direct from Scotland followed, at its peak 1200 cattle were brought in from 1878 to 1883.

The American Aberdeen- Angus Breeders’ Association was founded on Nov 21, 1883 in Chicago, Illinois. In 1950, it was renamed the American Angus Association. Today, it holds the distinction of being the largest purebred beef registry in the world.

Angus beef hardly needs an introduction; it is renowned for its fine marbling texture and superlative eating qualities. The Angus given a minimal amount of days on feed will manage to repeatedly turn out Prime and Choice grade meats. The Certified Angus Beef program was the first of its class. It provides Angus beef producers an increase in the marketability of their stock directly leading to higher premiums. For the consumer, it provides a consistent eating experience and the assurance of knowing what one is purchasing. In order to qualify under the phenotype requirements of the CAB programs, the cattle must exhibit at least 51% black coloration as well as the absence of non-angus traits (Brahman humps, dairy cattle conformation). The surge in the CAB program has led to a wide-reaching escalation of breeding black into cattle stock, most often using Angus bulls.

Angus bulls are an excellent crossbreeding option. Breeding to an Angus bull virtually eliminates calving problems. The resulting calves are born polled minimizing injuries in feedlot situations. The Angus’ black coloration also serves as “sun block” of sorts, helping to prevent cancers and sun burning of the udder. The ChiAngus (Angus x Chianina) and the SimAngus (Angus x Simmental) are only two examples of angus hybrids that carry the qualities of both breeds making leaner, more efficient grain converters with higher performance numbers.

While the high quality traits of beef are not exclusive in the Angus, their numbers increased due to their consistency in producing quality. There is little lacking in the Angus breed; it meets the needs of a demanding cattle industry on a wide range of points. It is a docile breed, relatively hardy; cows calve easily and have excellent maternal instincts. At feedlots its meat quality proves its superiority time and again. When in doubt, it is the cattleman tradition to go black—a time tested strategy that has served them well.