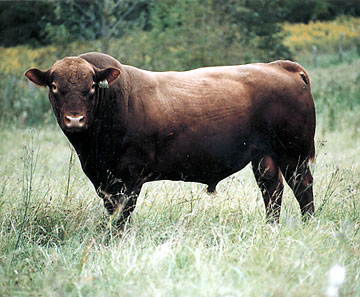 While distinctly different in color from its highly popular black counterpart, the Red Angus has all the desirable traits of the Black Angus and a breed association, which has served as the vanguard for all breed associations. It is a breed whose numbers are quickly rising as more people begin to perceive that the Angus is a two colored breed.

The origins of the Red Angus are those of the Black Angus. Angus cattle were developed in the counties of Aberdeen and Angus in northern Scotland. The selection of the cattle was based upon their polledness, ease in handling, high fertility and passive nature. Color selection did not come until the 1820s, when a rancher by the name of Hugh Watson chose the black color over red as the breed official color. He decided this based upon the color of his best bull. It is believed the red color was introduced while trying to increase the Angus hardiness and size. They may have been bred to native English longhorns –red cattle—thus acquiring the recessive red gene. The original Aberdeen-Angus handbooks, of 1862, show no color distinction.

In the 1870s and 80s, both red and black varieties of the Angus were imported to the United States. As the movement to proliferate Angus herds in the US continued, both Red and Black Angus grew in numbers—the black far outnumbering the red however. The American Aberdeen-Angus Breeders’ Association was established in 1883. Its herd books of 1886 and 1888 showed no differentiation of color. It was until 1917, that all colors but black were barred from the registry. Naturally, the breeding of the Red Angus was far diminished as the cattle lost value.

The success of the Red Angus is due to the hard work of those who by experience had noted the obvious similarities between the black and red cattle. In 1945, the Red Angus began its hard trek back to grace by selection of the best traits from both Angus colors, and careful breeding. The Red Angus breeders sought to prove the intrinsic similarities between the characteristics of both colors. The Red Angus was selected to be polled, of medium very efficient frame. It was to continue being a calm breed, with minimal calving problems and superior maternal instincts. The Red Angus beef was also to be of high palatability. Its producers raised the bar in terms of how they would provide evidence for a claim to equality, if not at times superiority.

The history of the Red Angus is the history of its association. The Red Angus Association of America was established in 1954. From the beginning, Red Angus supporters felt they had something to prove and went about corroborating their claim of equality with prototype programs and technologies. From the inception of its registry, Red Angus were required to provide performance data. Performance data is a measure of actual cattle qualities—weight gain ability, ribeye area, fertility potential based on anatomical measurements, frame size, percent fat present. The Red Angus was the first registry requiring such data. They established weaning weights before a set date for weaning had been adopted by the cattle industry.

The Red Angus Association has in many instances shown to have the foresight of implementing programs to help its members at later dates. Artificial insemination, while not extensive during the establishment of the association, was always open and unrestricted within the breed. As time passed and the technique became easier and more economical to carry out, Red Angus breeders had no red tape to overcome. The registry of the Red Angus in order to promote and further back its current breeders was also the first to implement a different registry classification for F1 offspring. F1 cattle are first generation hybrids between two purebred parents of different breeds. By allowing their registration, Red Angus hybrids enjoy the benefits of being supported by an association.

Supporting its members is definitely a priority in the Red Angus Association. Their commercial marketing program of 1994 enhanced the profitability of running Red Angus and their hybrids. In 1995, they created a Feeder Calf Certification Program, which via an impartial third party, in this case the USDA, certifies feeder calves as actually being of Red Angus origins. This not only benefits the ranchers by providing better payoffs, but ultimately consumers who can be sure of the quality they are purchasing.

Red remains the most popular color of cattle worldwide. The color continuity allowed by crossbreeding with the Red Angus is very marketable. Its hybrids such as the Balancer (Red Angus x Gelbvieh), LimFlex (Red Angus x Limousin) or SimAngus (Red Angus x Simmental) are examples of profitable cattle at market.  It is only a matter of time before the Red Angus will join the Black Angus and Hereford in the top spots of the cattle industry. It registry numbers are growing and its breed association continues to clear the path for increasing the profitability of the quite exceptional Red Angus.